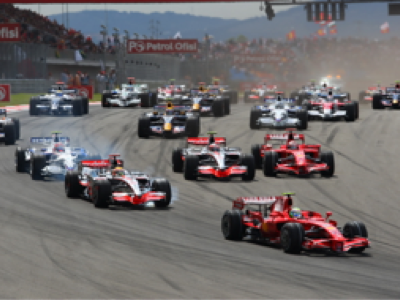 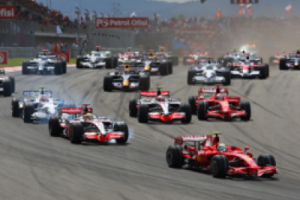 In view of the 2015 FORMULA 1 UNITED STATES GRAND PRIX, someone can ask himself how is to drive a F1.

What a lot of people don’t realise is that driving formula 1s and karts is extremely physical. People think you’re just sitting down and driving a car, so it can’t be that hard. But you have no servo mechanisms, practically no suspensions, a lot of vibrations, more than your vibrating plate in your gym club, and, when you turn or brake, you hit more than 5 Gs. That’s five times the weight of gravity. If you get into a last generation Porsche 911, for example, and smash the brakes to its full capacity, you’d be just around 1 G of deceleration, so, in a Formula 1 you’re 5 times that. And if you compound that  for 20 corners per lap, for 60 laps, that’s where the physicality comes in. The kart KZ is a bit less hard in lateral and longitudinal  accelerations, but the rhythm of actions is incredibly high. In accelerations you change gear almost every 1-2 seconds, while you have no time to check the RPM display, so you use your hearing, while, at the same time, you are fighting against the Gs in the turns and a bunch of competitors that want your position. This is an important mental component, that impact directly to your heart rate. Even in a simulator, your heart rate is still 120, 130, just because of your concentration. Because your mind is demanding that much. And in driving, obviously strength is important, but it’s secondary to the cardio.

The heart frequency and the flux of adrenaline is very high and you need a lot of aerobic and muscular training.

And the diet matter too because the weight is a big deal. To be 180 high and 85 kg rather than 75 kg is very much about controlling that. With the trainer, you should focus a lot on eating foods that cut down on water. In fact it is not surprising that some of the top drivers are also in the top list in other athletic competitions like Triathlon or biking.

The speed of actions and reactions in a Formula 1 or kart is extremely fast, so you need to have well trained your subconscious to act instinctively in the right way in any occasion, because there is no time for thinking, just acting. This is what needs a lot of time to train, like in other fast sports like football, basket, tennis. The problem is that right now, there’s not a clear path to Formula 1 for training. No one knows where to go. If you think about it, it’s the sport you can’t practice. If you want to play in the Davis Cup, you can play tennis until you literally can’t move anymore. You can’t do that with an F1. You maybe can with a kart, and this is why a lot of top F1 drivers are usually training on the kart and, at the same time, often kart drivers jump to the higher level of the formula.

And there’s no one teaching you about what to do off-track, about fitness, media, sponsorship, so how would you expect young kids to get there if there’s no education or form of training of any kind? Kids would do it, if they had an opportunity.

I think that the best initiative some teams have started, since some years, is the promotion series to find and properly support new talents. Also from a financial point of view it is an interesting business. Imagine the return of investment of a driver like Lewis Hamilton, grown in the McLaren environment.

With D4S Motorsport and TEKS we are involved in the development and testing of advanced materials and manufacturing processes for the future application in the motorsport sector, both Formula 1, Le Mans Series and even the Karting World Championship.

D4S Motorsport is involved in R&D activity on nanostructured coating able to damping the vibrations of metal based rotating and oscillating parts. The application is fundamentally oriented to engine and transmission parts.

We are also working on new concepts of Additive Manufacturing to produce almost in real time complex shape parts in special materials like the gamma-Titanium and other exotic alloys.

With TEKS we are focusing on processing of directional woven composite materials for high performance components.

Our engineering approach could be defined ‘integrated’ because it includes the basic material development, the co-design of the parts, the process optimisation and even the testing on the field.

We consider the driver experience a fundamental resource to build around it the concept of technology innovations. In the Motorsport sector, the driver is the real final end user, and his feedback must be processed and integrated in the optimisation loop, exactly like any other characterisation.

Moreover knowing well the ‘race environment’ always helped us, since the first steps, to understand some not-written procedures that make the difference to achieve the leadership in the race, or not.