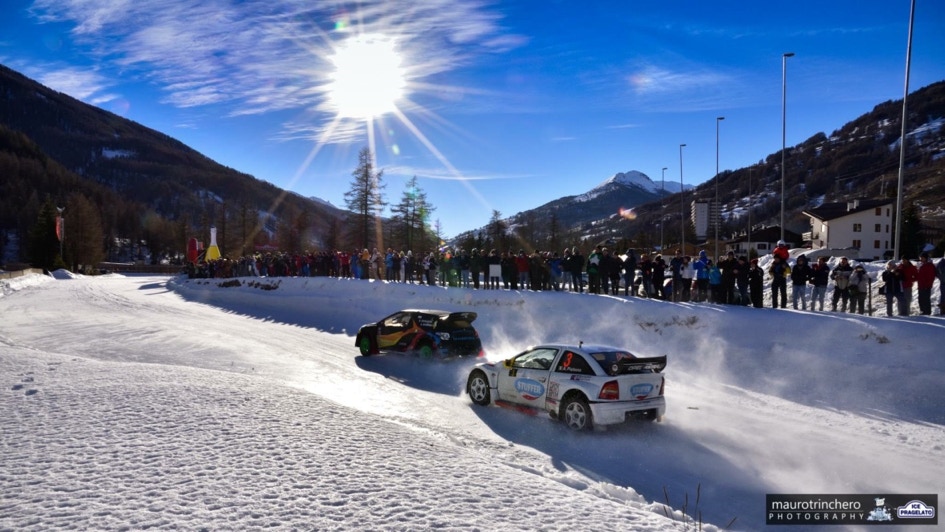 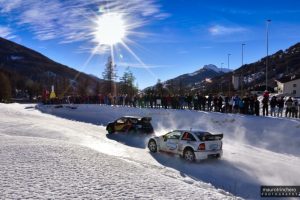 A beautiful sunny weekend accompanied the first meeting of The Ice Challenge 2017 which took place on the ice ring of Pragelato on the Italian Alps. The low temperatures of the previous days and the loving care of the track manager have given to competitors and spectators a perfect icy surface, which allowed to play without problems in Saturday’s qualifying and Sunday’s races, including the Master King in brawl Sunday afternoon.

Final success of Alessandro Pettenuzzo 25 year old, who has brought his Mitsubishi Lancer EVO VI on the top step of the podium with three perfect rounds.

Behind Pettenuzzo a concrete Luciano Cobbe has always traveled at the highest level with his Ford Focus WRC.  Complete the podium the German Armin Schwarz, former Toyota and Škoda official driver, which has been able to squeeze the most of his Citroën DS3 Proto by D4S Motorsport (motorized Alfa Romeo) that split with the Genoese Sergio Durante. Schwarz, accompanied in Pragelato by eleven year old son, has proven fun and helpful with fans and fans, but extremely professional just put the helmet on your head. It is the fastest in Saturday’s qualifying and Sunday immediately detached a significant time in the first heat, before a gradual deflation of the left rear tire forced him to pick up the pace and close pretty much on three wheels after tread separation in the course of ‘last lap. Speedy redemption of Schwarz in the next battery, which wins. In the third battery German champion takes the lead immediately.

Schwarz ranks behind his team-mate Sergio Durante, author of a very steady race on the schedule, improved lap after lap with the passing of the day. Durante precedes Alex Pregnolato, concrete and no problems with his Subaru Impreza, then the returning Luca Oldini, in its 19th season on the Pragelato ice, which was defended in the best way with his Peugeot Maxi against monsters whose pays a debt of hundreds of horses.

final success of the pilot of the Opel Astra Proto that exceeds a stunning pass the Citroën DS3 Sergio Durante. Third place for Luca Oldini

Pragelato (TO, 8 January) PIstono, who started from the second row with the third time, he immediately jumped at the first bend Luca Oldini, Peugeot 306 Maxi, who started on the front row alongside poleman Sergio Durante. Citroën DS3 Proto.

From that moment began a challenge shots of stunning detached and controlled skids that have thrilled audiences and pilots. For six laps PIstono attacked, with great propriety, Sergio Durante, who defended with equal correctness his leadership, choosing a wide trajectory that allowed Durante to go out very fast by turns, while PIstono trying to support the DS3 braking at limit and inside line.

in the last lap, during the exit of the hairpin Sestriere, Durante had un uncertain allowing PIstono to overtake and then lengthen acceleration. Third place for Luca Oldini who had no trouble adjusting Andrea Coti Zelati and his Ford Fiesta ST. Retreat after a day without hesitation, for Piergiacomo Riva which stops during the first lap with gearbox blocked .